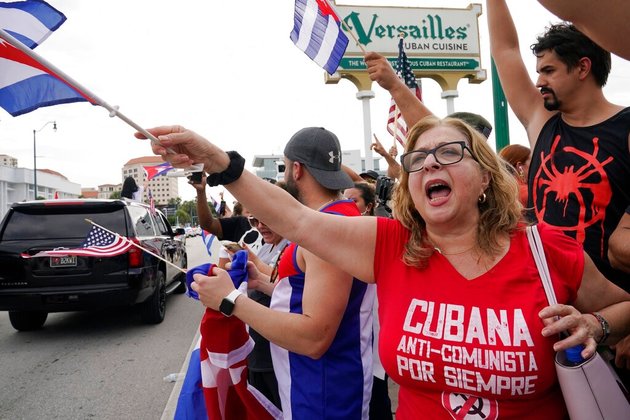 The Biden administration has imposed sanctions on Cuba's police force and two of its leaders following recent protests on the island against the communist government.

U.S. President Joe Biden said Friday before meeting with Cuban American leaders at the White House that more sanctions were coming "unless there is some drastic change in Cuba, which I don't anticipate."

Biden also said he had directed the Treasury and State departments to report to him within a month on how to allow Americans to send remittance payments to Cubans.

U.S. officials said the administration was working to find ways to permit remittances that would not benefit the Cuban government.

Earlier Friday, the U.S. Treasury Department announced the latest sanctions on Cuba, saying they were a reaction to "actions to suppress peaceful, pro-democratic protests in Cuba that began on July 11."

Thousands of Cubans took to the streets on that Sunday in the largest demonstrations against the Cuban government in decades. The demonstrators were protesting shortages of basic goods, power outages, restrictions on civil liberties and the government's handling of the coronavirus pandemic.

"The Treasury Department will continue to designate and call out by name those who facilitate the Cuban regime's involvement in serious human rights abuse," Andrea Gacki, director of the Office of Foreign Assets Control, said in a statement. "Today's action serves to further hold accountable those responsible for suppressing the Cuban people's calls for freedom and respect for human rights."

Cuban American leaders have been urging the Biden administration to do more to support to the Cuban protesters.

Among those who were at the meeting Friday with Biden were Yotuel Romero, one of the authors of "Patria y Vida," a song that has become the anthem for the protesters. Also present were L. Felice Gorordo, the CEO of eMerge Americas; Ana Sofia Pelaez, the founder of the Miami Freedom Project; and former Miami Mayor Manny Diaz.

U.S. officials say the Biden administration is also looking into ways to provide internet access to the Cuban people. Internet service was cut off at one point during the July 11 protest.

Some information for this report came from Reuters and The Associated Press.